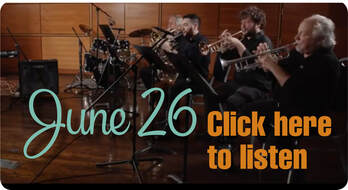 June 26 ~ Let us break bread together

Nathaniel Silberschlag
At age 20, Nathaniel Silberschlag is the newly appointed Principal Horn of The Cleveland Orchestra. The appointment was made by The Cleveland Orchestra's music director, Maestro Franz Welser-Möst, after a 5-year long international search.  The Principal Horn position of The Cleveland Orchestra is endowed as "The George Szell Chair."
The year before, Nathaniel was appointed Assistant Principal Horn of Washington National Opera/Kennedy Center Orchestra. At the age of 19, he was the youngest member ever to win a position with the Kennedy Center Orchestra.  He was awarded tenure at there after only 7 months.
Nathaniel received his Bachelor Degree in May of 2019 from The Juilliard School, where he was a student of Julie Landsman.  While at Juilliard, Nathaniel was a proud, and grateful, recipient of a Kovner Fellowship.
Nathaniel comes from a family of 17 professional musicians. Among them are former principal players of the New York Philharmonic, Italian National Orchestra RAI, and Jerusalem Symphony. He is the third generation of his family to attend the Juilliard School. Nathaniel made his debut in Italy at age 9. The story appeared on the front page of Italy’s newspaper, “La Stampa.”
Nathaniel has performed as a soloist with The Juilliard Orchestra, Bulgarian Philharmonic, Romania State Symphony, New York’s Little Orchestra Society, and The Chesapeake Orchestra. Nathaniel has also performed with ensembles such as The New York Philharmonic, The Orpheus Chamber Orchestra, The Romanian State Symphony Orchestra, and Chesapeake Orchestra.
Nathaniel is a graduate of the National Symphony Orchestra Youth Fellowship program. He was a student of Sylvia Alimena and was also a member of her Brass of Peace program.  Nathaniel also spent two summers in the Kennedy Center’s Summer Music Institute. In June of 2015, Nathaniel was the first recipient of the Edwin C. Thayer, Laurel Bennert Ohlson award for artistry and excellence on the French Horn.
Nathaniel was a fellow at the Music Academy of the West in the summers of 2017 and 2018.  In January of 2018, Nathaniel was named one of ten Zarin Mehta Fellows to perform with the New York Philharmonic as part of their 2018 Global Academy. He has attended The Alba Music Festival, Italy since 2007.  He attended The Eastern Music Festival in North Carolina in 2016.
Nathaniel is also a member of the New York Festival Brass Quintet which has a new recording release due out in July.
This spring Nathaniel has already appeared as a soloist at The Alba Music Festival in Italy, and here with The Chesapeake Orchestra. He has also performed at San Diego's Mainly Mozart Festival and with The Washington National Opera.  In early June he will perform in London as principal horn of the Juilliard Orchestra on their tour and then begins his role with Cleveland at its summer home, The Blossom Festival.
In October 2019, Nathaniel will perform on PBS's Live National Television Broadcast of The Cleveland Orchestra's gala concert from Carnegie Hall in New York. He is from Leonardtown, Maryland, which is part of the Chesapeake region, south of Washington, DC.

Zachary Silberschlag
Zachary Silberschlag, trumpet, was appointed principal trumpet of The Hawaii  Symphony in Honolulu in May 2018, he has held Principal trumpet positions with “The Orchestra Now" based in New York, The Chesapeake Orchestra, and the New York Festival Brass Quintet. He performs regularly at Carnegie Hall, New York's Lincoln Center, and at New York's Metropolitan Museum of Art.  Recently, Zach performed in concert with Baltimore Symphony. Zachary has performed as a featured soloist with the Romanian State Symphony in Italy, Bulgarian Philharmonic, “The Orchestra Now,” Chesapeake Orchestra at River Concert Series and at National Harbor, and on numerous occasions in New York City.  Zachary holds a BA from St. Mary's College of Maryland, Masters of Music from Manhattan School of Music, and a Doctorate from the State University of New York at Stony Brook. In Spring 2018, Zachary with the New York Festival Brass played  the premier recording of Elliott McKinley’s Brass Quintet. Zachary has attended the Eastern Music Festival and the National Orchestral Institute NOI.

Giuseppe Nova
Giuseppe Nova's performances have been hailed in international publications. The Washington Post called his performance "charming." Other critics have commented enthusiastically: "enlightened performance... an extraordinary musical sense" (Il Giornale); "a magic performance of virtuosity" (Gazzetta del Sud); "musical art at its perfection" (Nice Matin, France); "a genius mode dialogue" (Nürtinger Zeitung, Germany); "in a class of his own" (Secolo XIX); and "simply divine…" Concert Reviews UK, ... Canino and Nova for an evening of excitement ... the bravura and more, the class, the artists "Monthly Lombardy" ... charmer and elegant, straining to empty, like a cornucopia, his flute with music pearls "HubCulture", The public has long applauded the main performers Maxence Larrieu and Giuseppe Nova ... admirable quality approach, with fluid, gentle and mild interpretation... Arena di Verona ".
Graduated from the Conservatory in Turin and Conservatoire Supérieur de Lyon where he studied with the celebrated Maxence Larrieu. Described as one of the most outstanding Italian flutists of his generation, Mr. Nova made his debut in 1982 as a soloist with the RAI Symphony Orchestra. This marked the beginning of a brilliant career which has led him to perform in the most prestigious concert halls in Europe, the United States and Asia (Japan, Thailand, China, Korea, Singapour). Soloist with several Orchestras, such as Prague Virtuosi, Ensemble of Tokyo, Orchestre de Cannes Côte d'Azur, Camerata Bohemica, Arena di Verona Orchestra, Thailand Philharmonic, West Bohemian relojes imitacionSymphony orchestra, Orchestre Royal de Chambre de Wallonie, Chesapeake Orchestra, Kazakh Academy of Virtuosi, Sanremo Symphony Orchestra, Moravian Philharmonic Orchestra, Prague National Theatre Orchestra, Turin Philharmonic, Tübinger Kammerorchester,  in prestigious concert halls and Festivals, like Suntory Hall Tokyo, Rome Parco della Musica, Dvorak Hall and Rudolfinum in Prague, Seoul’s Art Center. Teatro Filarmonico in Verona, Serate Musicali in Milan. He taught at the Accademia di Pescara, at the Arts Academy Foundation in Rome, at the Scuola di Saluzzo, visiting artist at St. Mary’s College of Maryland, USA. He has recorded extensively (Camerata Tokyo, Universal) and mostly available on iTunes. Giuseppe Nova has performed at the G20 in Guatemala City, he received in Prague the European Award for Artistic and Cultural activities, a Chamber Music Award in Kyoto, and in 2018 was appointed BMIMF Best Artist at the Korean Busan Maru International Festival. He’s invited by the Conservatoire de Lausanne and the Conservatoire Supérieur de Lyon as Expert Juror for Bachelor and Master of Arts degrees, he now teaches at the Conservatoire de la Vallée d'Aoste.

Lior Willinger
Award-winning pianist Lior Willinger performs as a solo and chamber artist in the US and abroad. At the age of 19, he made his New York concerto debut at Carnegie Hall performing Piano Concerto No. 1 by Dmitri Shostakovich. He won grand prize and audience prize in the Camerata Artists International Piano Competition following his performance of Piano Concerto No. 3 by Sergei Prokofiev at Merkin Hall.
An avid chamber musician, Mr. Willinger has collaborated in recitals with musicians of the Boston Symphony, Detroit Symphony, Baltimore Symphony, Atlanta Symphony, Cleveland Orchestra, and Minnesota Orchestra. He currently serves as Director of the Homewood Chamber Music Seminar, coaching student chamber groups at Johns Hopkins University. Passionate about the music of our time, Mr. Willinger has premiered countless works and has released a 10-part commissioning/performance/video/article series on I CARE IF YOU LISTEN called Active Listening. Each work in the project hopes to bring awareness and action to a social justice issue chosen by the composer.
Mr. Willinger earned the Bachelor of Music degree and the Master of Music degree from the Peabody Conservatory, where he is currently pursuing the Doctor of Musical Arts degree with renowned artist-teacher, Yong Hi Moon. During his graduate studies, Peabody Conservatory honored Mr. Willinger with the Sidney Friedberg Prize in Chamber Music and the Presser Music Award "given to a student demonstrating excellence and outstanding promise for a distinguished career in the field of music.”
Active in the Baltimore community, Mr. Willinger performs weekly for infusion patients at Sinai Hospital’s Lapidus Cancer Institute. He is the Founder/Artistic Director of the If Music Be the Food concert series in Baltimore which acts to increase support and awareness for those struggling with food insecurity. The series, which partners with Maryland Food Bank, has raised thousands of meals for those in need. He also serves as resident pianist for the Baltimore Symphony Orchestra's Orchkids program which provides a free music education to students in impoverished areas.

Alac Manasse
Noted for his “rich, pure sound” by the San Francisco Classical Voice, clarinetist Alec Manasse is completed his Bachelor’s degree at The Juilliard School. Alec has performed with many of New York City’s top orchestras, including the Orchestra of Saint Luke’s and the American Ballet Theater. An awardwinning clarinetist, Alec received First prize at the International Clarinet Association’s 2014 high school competition. An avid chamber musician, Alec won First Prize in the woodwind division of the 2016 M-Prize International Arts Competition, as well as Third Prize in the 2018 Fischoff International Chamber Music Competition. Alec regularly performs chamber music at the Cape Cod Chamber Music Festival and The Festival de Musique in St. Barthelemy. A two-time fellow at the Colorado College Summer Music Festival, Alec has collaborated with members of The Ying Quartet and pianist Jon Nakamatsu.

Milad Daniari
Bassist Milad Daniari has been a member of the Shreveport Symphony since 2019 and maintains a dynamic career in NYC as a frequent musician with orchestras on the East Coast including the American Ballet Theatre, Albany Symphony, and the Vermont Symphony in addition to serving as Principal Bass with Pegasus: The Orchestra. Milad regularly performs at major venues including Carnegie Hall, the David H. Koch Theater, the Metropolitan Opera House, Alice Tully Hall, Jazz at Lincoln Center, and the Metropolitan Museum of Art. Previously, he served as Co-Principal Bass with The Orchestra Now and has served as Principal Bass with the Chesapeake Orchestra. As a chamber musician, Milad has appeared at the Roxbury Arts Group, at the National Opera Center in the world premiere of Martin Hennessy’s monologue operas in 2019, and in workshop with Decoda, leading students of the New York Youth Symphony. Milad’s festival appearances include Co-Principal Bass at the National Repertory Orchestra as well as the Round Top Festival Institute, Colorado College Summer Music Festival, Bard Music Festival, Grafenegg Academy, and the Alba Music Festival. A recipient of the Ambrose Monell Foundation Scholarship, Milad received his Bachelor of Music from Manhattan School of Music as a student of New York Philharmonic Principal Bass Timothy Cobb. He attained his Master of Music from Bard College.

The River Concert Series program is subject to change